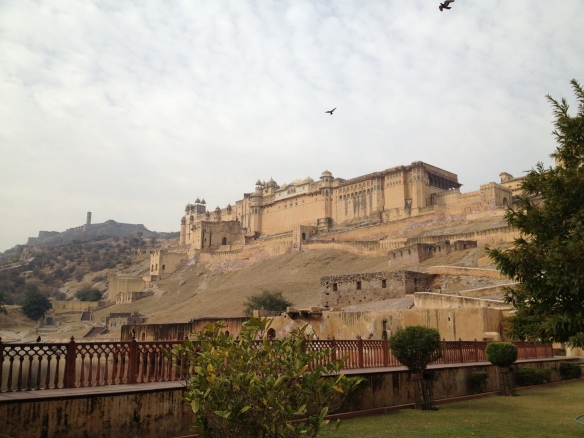 After just one night in Agra, and a day exploring the Taj Mahal and Agra Gate, our group of three (myself, driver and guide) headed to the state of Rajasthan and its capital, Jaipur.

Rajasthan is a state in the Northwest region of India.  In Hindi, Raj means the rule or king, and “sthan” means land.  So Rajasthan is the land of the rulers or kings.  It’s where all the great palaces of the old rulers are located.  The region is really popular with foreign and domestic tourists, so wherever you go, you’ll find guides speaking English, Spanish, French, Chinese and Japanese.  It occurred to me that I don’t really know anything about the history of this part of the world.  I don’t recall learning anything I might have been taught about the Mughal Empire or any of the numerous tribes that helped found what is present day Rajasthan.  Jaipur is the capital of Rajasthan and has some of the best of the palace fortress complexes in the region.

It was in Jaipur that I visited my favorite site in all of India… the Amber Fort.  I actually liked exploring this more than the Taj Mahal.  The fort was built by a general of the Mughal empire in the early 1600’s.  It contains several courtyards, palaces, temples and living quarters for the ruling class.  Although left in a state of disrepair for over a century, preservation efforts in the last couple decades are working to keep the fort open to the public. 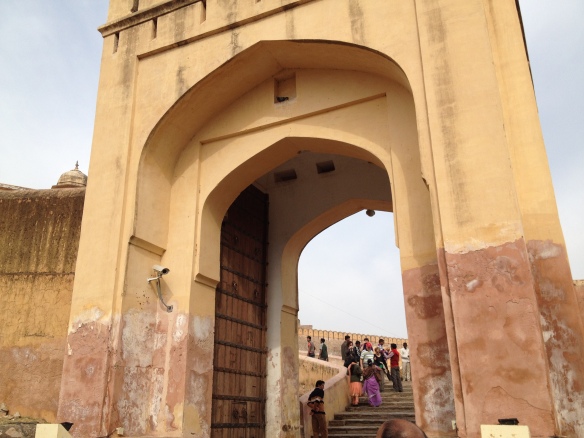 There were animals just roaming around the former palace grounds.

I can’t recall every being so close to an elephant before.  Perhaps in a zoo?  But this was different as it was right in front of me.  I didn’t notice the sign saying “no photos of elephants” until after I had taken a few.  No one said anything.  You could ride an elephant down the hill for 900 rupees which is $18.  It’s a short ride, and honestly didn’t appeal to me, so I didn’t do it.  $18 is a lot in India.  You can get a hotel room for less than that price.

This place is just massive.  I think I like walking around places like this more than the Taj since you get more of a sense of daily life of the people. 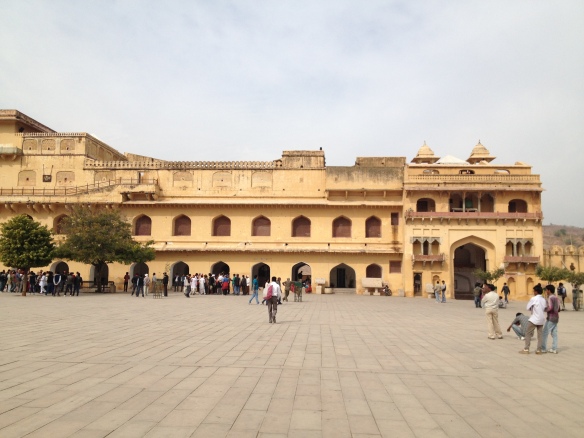 There were langur monkey’s just hanging out in the window ledges.  Vicky, my guide, told me the black face monkeys are safer to be around and are natural enemies of the red face monkeys… the rhesus macaques.  They’re seen as being an important control tactic in India to keeping the red face monkeys in check. 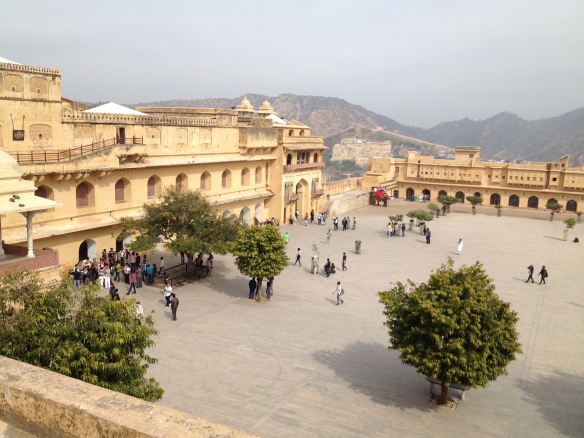 It was a little warm that day, and the marbled floors of these giant rooms were nice and cool in the shade.  Marble has that effect of staying cool, and I’d imagine lounging there on a hot summer day was an ideal place to be a few hundred years ago. 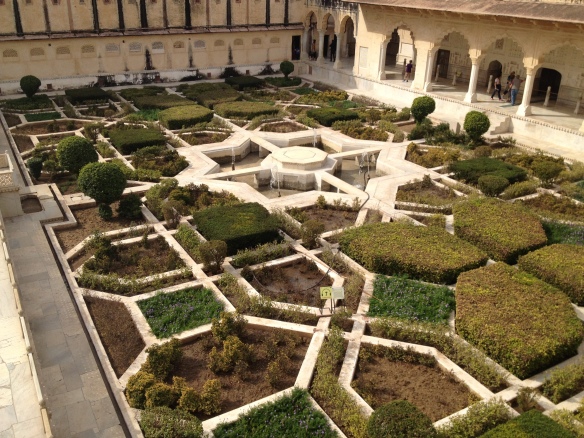 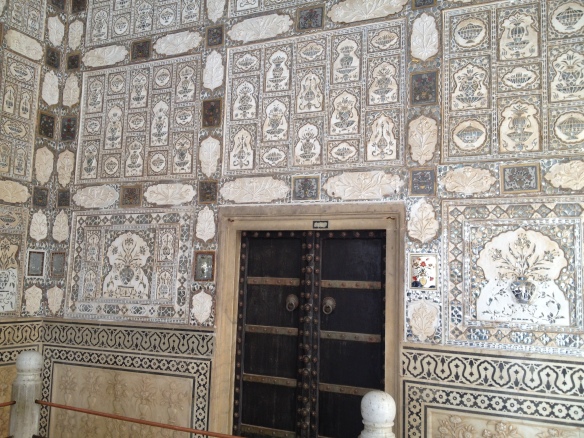 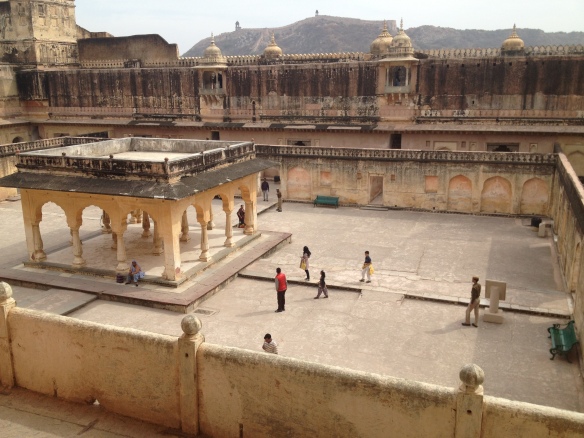 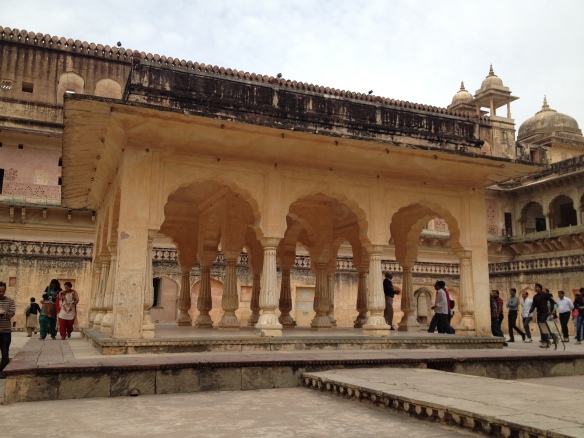 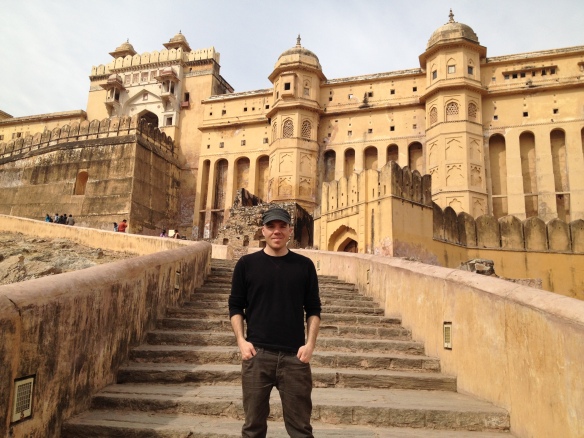 I had a really good day exploring the Amber Fort.  That place is something I would definitely go back to.  If I do, I would hire a guide who specializes in that location, as I was really curious as to what all the halls, rooms and courtyards would have been used for.  At this point, it was starting to hit me that I can’t recall ever learning the history of this part of the world.  I remember Ghengis Khan, but I don’t remember the Gergers, the Rajput, or the Mughals.  It would become a common theme that popped up in my Asian travels.