In terms of my Eurotrip, I saved Spain till the end.  For one, I wanted to head south as the weather got colder.  That was why I started Europe in Iceland, UK and Denmark.  However, Spain wasn’t just another country along a path I was following.  For most Americans, Italy or Scotland or Ireland are the places in Europe they dream of going the most.  For me, it was Spain.  I speak a little bit of the language, not enough for conversation, but enough to get by.  I had also read a lot about it, and something just clicked for me.  My first stop was the home of the 1992 Summer Olympic Games… Barcelona.

I arrived in Barcelona after a six hour bus ride from Toulouse.  Barcelona is famous for a number of things… Catalunya, Gaudi architecture, an incredible football (soccer) team, party life, beautiful beaches and pickpockets.  Fortunately, I didn’t have any run-ins with that last one, but I got to see a lot of the other stuff.  I felt rather lucky.  The pickpockets in Barcelona are some of the best in the world, and I heard tons of stories.

On my first full day, I went on a walking tour of the Gaudi buildings.  Antoni Gaudi was an architect who lived in Barcelona in the late 19th through early 20th centuries.  He was known for being very tempermental and hard to work with, and his ideas and designs left people wondering if he was a madman or a genius.  Much of his work was inspired by nature, so there’s this mushroom appearance to everything in my opinion.

Gaudi’s masterpiece building is a highlight of Barcelona.  It’s called La Sagrada Familia (The Holy Family) and is a massive structure that pokes above everything else in the skyline.  This functioning catholic church has been under construction for over a hundred years, and is estimated to be completed in another 30 years.  The outside is a crazy mashup of sculpture, towers and stuff I can’t really describe.  Whether you like it or not, it just blows you away as you get up close to it.

I paid the 13 euros to go inside and get a look at what everyone was talking about.  It’s intentionally designed to appear as a forrest, with different sized and shaped columns. Nothing is by accident, and even the tiniest details have some meaning or purpose. 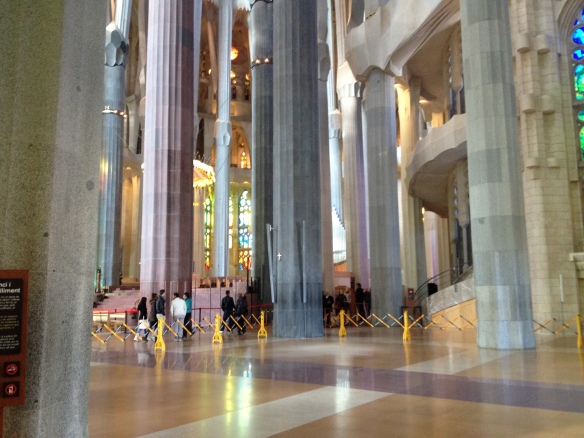 In addition to buildings, Gaudi also designed a park… Park Guell which is named after the artist’s primary benefactor, Eusebi Guell.  A Catalan entrepreneur, Guell became a huge fan of Gaudi’s work and gave the architect carte blanche to build whatever he wanted.

It’s located at the top of a hill in the northern most part of the downtown area.  This afforded a really beautiful view of the city.

So, you be the judge.  Is Gaudi’s work beautiful?  Does it make you want to go there and see it for yourself?  Is it tacky and over the top?

Here are some random photos over other parts of Barcelona I thought were nice. 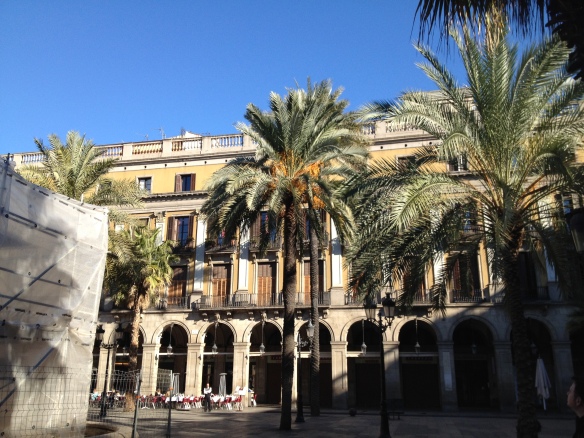 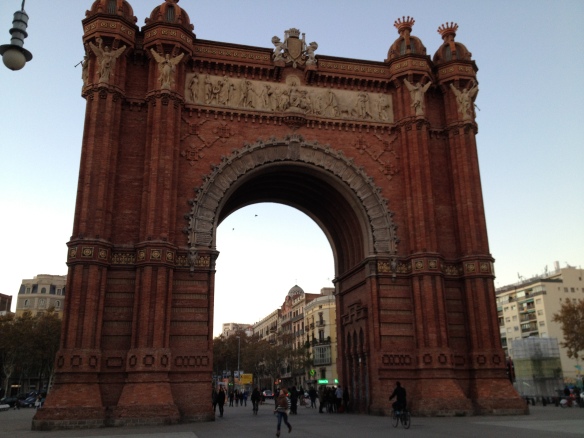 Barcelona is on the coast of Spain and has some really incredible beaches along the Mediteranean Sea.  I was reminded of my time in San Diego walking along the one below.

I love staring out at an endless body of water while walking along the beach.  So relaxing.  I just noticed one of my photos has something that looks like the Loch Ness Monster poking out of the water… middle center… can’t miss it.

No trip to Barcelona is complete without experiencing some of the nightlife.  A famous spot recommended on Trip Advisor is a place called Chupitos which means shots in Spanish.  They had a menu of something like over 200 different kinds of shots.  These weren’t your typical shots of tequila or some other liquor.  These were creative, and actually contained less alcohol so you would order several.  No one really orders from the menu, though, but instead just asks the bartender for ideas.  Sometimes you just see something really cool involving lots of flames and order it.  One of my favorites was called The Boy Scout.  You’re handed a marshmallow on a stick.  A shot is poured, and then a pool of alchohol is poured on the bar and lit on fire.  You roast the marshmallow in the fire, and then dunk it in the shot.  You eat the marshmallow and then do the shot.  Fun stuff.  At 2 euros a shot, I think I remember having 6 which made me as drunk as if I had 2 to 3 normal shots.  The shot below was one of the most entertaining to watch.  I don’t remember the name, but it involved inhaling the vapor in the glass after drinking the shot.

The one below was called El Diablo (The Devil).  It involved some red liquid that was sacrificed in the flames of a cross made on the bar.  The bartender used tongs to move the shot around in the flames before pushing it in front of you to drink.

Other than Chupitos, I joined some others from the hostel for a pub crawl on another night.  The group was a good mix of other travelers and people from all over Europe on a holiday break from work or school.  We didn’t get too crazy, but I felt like whatever kind of partying you were up for, Barcelona was game.

A quick note on the hostel I stayed in.  They had this amazing way of getting everyone together everynight… they made a free dinner for the guests.  Free food has a way of attracting people, so around 9:00 every night, almost everyone staying in the hostel would be in the kitchen enjoying dinner, getting to know one another, and swapping stories from the day.  It was a great way to meet people, and we would often go out later at night for drinks.  One night, the hostel made paella…

However, the best paella I had in Barcelona was this place the hostal recommended called Bosque Palermo.  It was definitely an experience.  Looking back on Spain, it was actually the best paella I had in the entire country.  Just looking at the photo makes me want to have another dish of that stuff.  I had some good food in Spain which I’ll post about in my other Spanish city updates.

One final word and a bit of controversy in Barcelona.  The city is in an area of Spain called Catalunia.  Most Catalans don’t really consider themselves Spanish.  Similar to Scotland, there is a huge separatist movement to make Catalonia independent of Spain.  The argument is that they have their own history, language and culture that are very different from the rest of Spain.  Someone I spoke with also felt there would be a number of economic benefits to independence, and they thought Catalans were being unfairly pulled down into Spain’s current economic crisis.  However, if Catalonia did break off from Spain, they would not automatically be just another country in the European Union.  They would have to apply for membership and wait several years for the process to work itself out.  They would also need to find another currency in the meantime since they couldn’t remain on the Euro.  It’s one of those stories that pops up in the news that I wouldn’t have paid much attention to in the past, but will definitely be interested in now.

So that was my Barcelona experience.  I was there a month ago, and I’m just now writing about my experiences, so yeah, I’m behind on the blog at the moment.  At the time when I left Barcelona, I didn’t actually enjoy the city as much as I thought I would.  I didn’t click that well with people at the hostel for some reason.  I’m not really a party animal, and Barcelona is a major party town, so that part doesn’t appeal to me.  Also, the Gaudi architecture isn’t something I care for either.  In my, admittedly, uneducated opinion, it’s tacky and too busy.  There’s just way too much going on in his buildings.  As for the Catalan language, part of the reason for being in Spain was to practice my Spanish.  Almost every Catalan speaks Spanish, but they would rather speak Catalan, so I never really knew if I was offending someone by trying to use my Spanis.  With that said, though, as I’m writing this blog entry and looking back at my photos, I realized just how much I enjoyed being in Barcelona.  It’s a crazy beautiful city, has awesome beaches, and plenty of nightlife and things to do to keep you busy.  The metro is super simple to navigate the city in.  I probably wouldn’t want to live there, but I definitely want to go back, perhaps with some friends and experience the city again.  Just about everyone I met backpacking raved about Barcelona, so I think if you’re on the fence about going, don’t hesitate and just go.