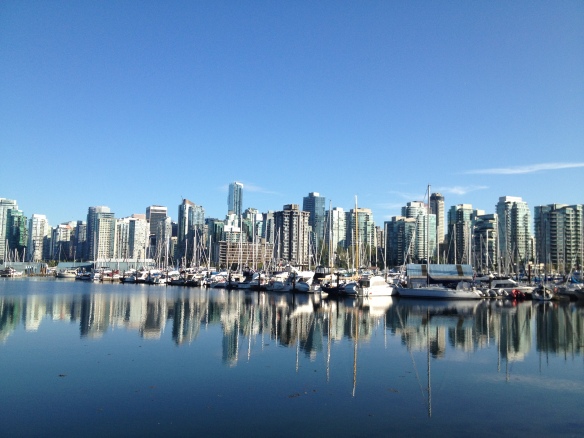 On the bus ride to Vancouver, my brother reminded me that although it may not feel like it, this was the start of my international travel.  My only impression of Vancouver before arriving was that I heard it was very beautiful and cosmopolitan, both of which proved true.  The backdrop of the mountains and Vancouver Bay surrounding the city is incredible.  I’ve seen similar scenery in Seattle and Portland, but the foothills are so close in Vancouver, and the micro-climate around them creates this cool view from the downtown area.  According to Wikipedia, over half of Vancouver’s citizens speak something other than English as a first language.  I didn’t take my own survey, but I did find the city to be extremely diverse and rich with culture.  I heard at least 6-8 different languages just walking down the street everyday, and it wasn’t just tourists.

Shortly after arriving, I switched out my currency and went the grocery store to stock up for the week.  I realized on this trip that my whole routine of eating cheaper by getting food at the store is also a really cool way to get a feel for local customs.  In Canada, almost everything is labeled in French and English.  You also have measurements in kilos or mililiters… as does most of the world.  It’s the mundane things I find the most interesting sometimes.

Once again, I found myself in a hostel.  I stayed at the Samesun Backpacker’s hostel on Granville street right in the middle of downtown Vancouver.  It was a great location, and as usual, I was able to meet some people to go exploring with.  An interesting tidbit… the hostel had a bar open to the public on the first floor.  I guess this is common in Europe, and it’s obviously a great way to meet people.  Some of the hostels in the US don’t even allow alcohol on the premises, or really restrict where you can drink.  The drinking age is 19 in Canada, but most of the people staying in hostels are over 21 anyway.  I guess the slightly greater potential for underage drinking scares US hostels?

Up until my last night, I hadn’t met a single American staying in the hostel, but there were tons of Germans and Austrailians.  A lot of the people staying in the hostel were looking for jobs and places to stay.  Much of Europe and Austrailia have an arrangement with Canada for those under 30 years old.  Residents can get a working visa in Canada without an employer sponsoring you for one year.  Aussies actually get two years, and thus explains why you find so many in Canada.  That’s a pretty cool arrangement, and in theory, equal amounts of citizens go work in other countries so no one is “stealing jobs”.  In fact, I met an English girl a month ago who was headed to Austrailia for work.  If there’s some downside to this, please let me know, because I think it’s a shame we in the US don’t have a similar arrangement with other countries.

Throughout my USA travels, I’ve really become accustomed to using the maps app on my phone to navigate new cities and public transit systems.  I could have let my phone roam in Canada, but that would have been really expensive.  So, on my first day, one of my hostel mates, Shahar, and I were interested in seeing if we could get sim cards for our phones.  Shahar is from Israel and was on her own solo trip around Canada.  She was staying in Vancouver for a couple weeks.  After we checked out a couple cell phone providers, one called Telus seemed to be the best deal at $30/month ($10 sim card + $20 service) for a data/text plan.  It was a bit much for just one week of usage, though, so I decided to stop being a wimp and see how I would do going one week without full use of my phone.  It turned out okay with the paper map from the hostel, and there was just one time where I really wished I had my phone.  I found WiFi all over, including the hostel, coffee shops, restaurants, and the Visitor Centre, so I was at least able to get email, and look things up.  A bit of tech news… a friend turned me on to a phone app called Viber that I found pretty cool.  It’s similar to Skype, and I used it for texting, though it does voice as well.  Viber doesn’t require a login, and just uses your phone number to uniquely identify you, but obviously is just doing text and voice over the internet.  If you let it scan your contact list, it will show you everyone you know who is also on Viber, so no need to “friend” people like Skype.  I don’t get any kickbacks from Viber, but I think it’s definitely worth checking out if you will be out of the country and want to stay in touch or send friends quick pics or updates.

On my first full day, Shahar and I went to Stanley Park which is on the Northwest edge of downtown.  It’s this huge urban park just Northwest of downtown.  It’s a little bigger than Central Park in NYC, and contains some huge trees, and ponds.  I’ve become so used to Pacific Northwest scenery that the dense forresty of Stanley Park wasn’t that new to me, but for Shahar, she was really blown away.  Everything from the birds, squirrels and racoon we saw amazed her.  She reminded me that Israel, especially Southern Israel, doesn’t have much greenery or wildlife.  It gave me a new perspective, and I found a greater appreciation for what I’ve been able to experience in my travels. 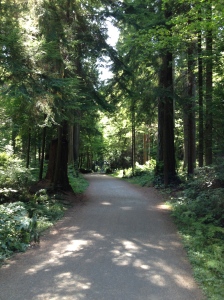 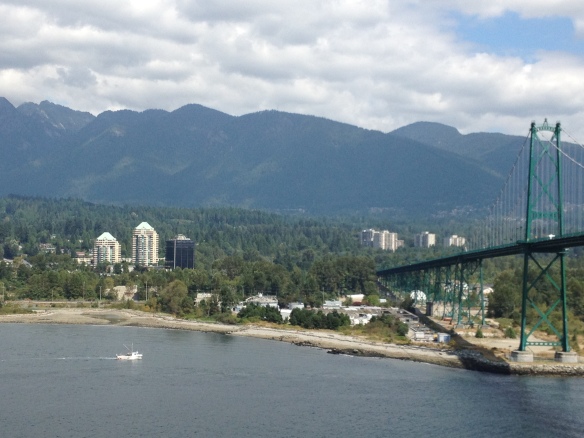 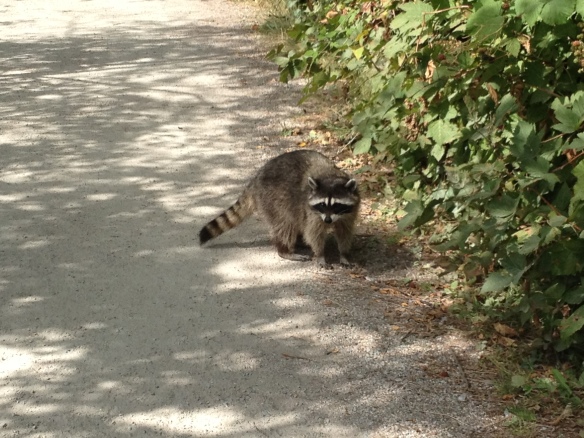 After Stanley Park, Shahar wanted to go to the Vancouver Aquarium.  I wasn’t exactly planning on going, and the $30 admission does a lot of damage to my daily budget goal.  I also didn’t really care to see a bunch of fish, but Shahar talked me into it.  Definitely a good idea, and glad I went. 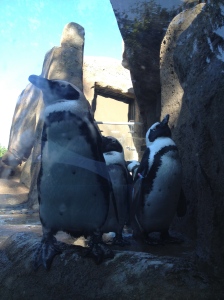 Of course, it’s a lot of big fish tanks, but they’re filled with some exotic stuff.  The highlights of the day, though, were the shows.  They have trained Beluga whales and dolphins that do some things you think would be impossible to train an animal to do.  It still baffles me how it all works… a simple hand wave and the dolphins jump about 10 ft out of the water in total synchronization.  Too bad I couldn’t time it right, or I would have taken a picture.  The whales were awesome too, and had almost human like expressions on their faces.

I spent just about all my time in the downtown area, but also made it to Granville Island which is actually connected to downtown through a bridge.  They had a cool public market and a good brewery… I couldn’t resist trying their sampler.

Honestly, I didn’t get around or take advantage as much of British Columbia as I should have.  I could have tried to make it to Whistler or some of the surrounding islands.  For the first time on the trip, I felt a bit of travel weariness.  I wouldn’t say it was burnout, I just didn’t have the same fire for going out exploring as other cities.  It bothered me I felt that way in such a cool city, and wondered for the first time if I had enough gas for a lengthy overseas trip.  I have been on the road for two months, but I don’t feel like I want to come home yet… not even close.  I can’t expect to always be pumped up, and it’s quite common to have this feeling from what I’ve heard from other travelers, so I’m just chalking it up to needing a few more down days.

So, once again, good trip, and my only regret is not getting out of the downtown area.  I need to work on a couple things for when I get out of the country.  For one, my bank card didn’t work in the ATM’s here.  It worked for purchases, though, and my bank couldn’t explain the problem.  Luckily, I had enough USD on me to convert to Canadian dollars, so no biggie, but definitely something to iron out.  I’m really excited to begin the overseas part of the journey.  I know it’s going to get harder, but it will also be more interesting.  Canada is still North America and not really that much different from the US.  The Europeans I meet all keep telling me how much different it’s really going to get, so can’t wait for the experience.